The installation was very quick and Debian-like. The whole process took 06:08.7 minutes from Live CD boot to installed desktop. At first boot, I was presented with a beautiful Openbox desktop 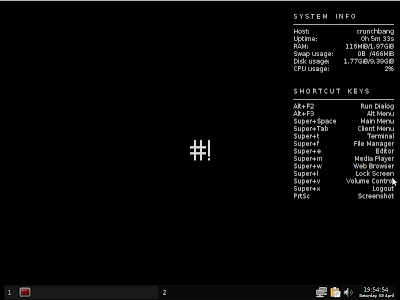 Crunchbang is not for the Linux noob, not everything works by default, and some things require a little tinkering. It also has a very clean menu-less and icon-less desktop, which is pretty, but not very beginner-friendly. Right-clicking on the desktop does give you a nice, customizable menu. There is also a list of shortcuts displayed by conky, which is very helpful. Crunchbang with Openbox has a nice look to it, which definitely appeals to the desktop minimalist. The default installation is <2GB not including the post-installation script packages, which is pretty small compared to most standard distributions. There are some packages like vi, however, that aren’t fully installed, which is kind of annoying. I ended up having to install the full versions of some software before the system was totally usable for me.

Overall, Crunchbang is as fast as it can be without sacrificing much functionality. It fully boots, from power button to desktop, in 28.7 seconds, which is very respectable. It’s not as fast as the little guys, but it has much more functionality. It doesn’t have all the bells and whistles of the big guys, but it’s much faster. I would definitely recommend it for installation on a netbook, or something with a SSD. It’s also well suited for a Laptop or Desktop installation. Give Crunchbang a try, I guarantee you won’t be disappointed…